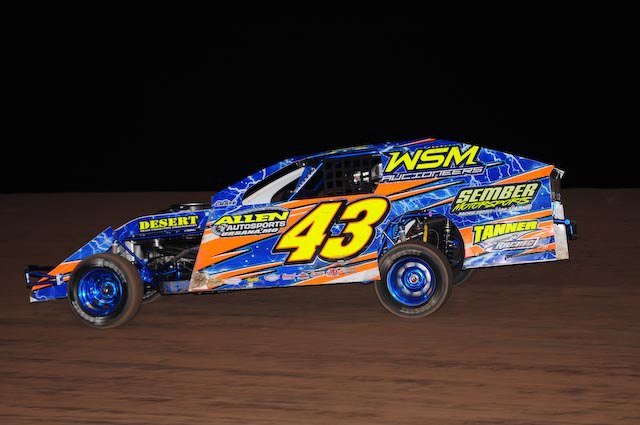 Pinal County Federal Credit Union stepped up once again motivating the San Tan Ford South West Modified Championship Modifieds with an escalated purse for showing up with 30 cars or more.   PCFCU will pay $1000 for the winner of Saturday nights feature and $90 to start the 26 car main event if there are 30 or more cars to show up in the IMCA Modified division.  Non Qualifiers will receive $40 in tow money.  Weekly feature pay for 29 or less cars with $40 NQ money.

Modifieds started the season last week with action from front to the back of the 33 car field. RC Whitwell clinched the opener followed

This Saturday night San Tan Ford proudly presents the return of the San Tan Ford South West Modified Championships to Central Arizona Speedway and the first annual San Tan Ford night at the races!
The best of the best in the IMCA modified division will all have their sites set on the $16000 points fund and championship run that will begin the 1st of 25 races in the quest for the title in Saturday nights $1000 to win feature. Consistency will play a key roll in the 2015 championship as most of the front runners from last year will also be joined by new entries in the division that the

New Mexico native and reigning ASCS champion Rick ” The Real Deal” Ziehl closed the show with an epic battle and lap 14 high side pass on Lorne Wofford after starting in 6th position to clinch the first ASCS Wing feature of 2015 at the Central Arizona Speedway season opener.   Battles through out the field were some of the best in recent memory with only one yellow slowing the 25 lap feature.
Eric Winemiller topped the X-Mod division leading wire to wire, Ty Weidner  bested the Pure Stock division, 2014 champ Brenden Priest claimed modlite victory and Virgil McArthur grabbed the first bomber victory of 2014.
A record crowd visited

ASCS Wing Sprint cars are set to headline this Saturday nights action packed season opener as the entire field of championship hopefuls will fill the pits of Central Arizona Speedway for the first time in 2015.   Alex Pettas claimed victory last time the wing sprint cars graced CAS and will have his hands full to play the repeat as 2014 Champion Rick Zeihl and 2nd place finisher Bob Ream Jr. , who battled the championship

The 2014 Arizona Speedway and Central Arizona Speedway Celebration of Champions will be on Saturday night December 13th at Pearls Banquet Hall located at 1455 S Stapley Dr in Mesa, AZ. 7:00pm. It will be catered by Pigglys Smokehouse Barbecue Grill. Tickets will be $20 per adult and $10 for kids and will be on sale starting this Saturday night at the pit board. The menu will be Pulled Pork and BBQ Brisket. If you haven’t had their food at their restaurant it is fantastic! Deadline for purchasing tickets will be November 28th (Deadline moved to December 2nd). If you do not want to purchase at track an order

The word is out and stage is set for the 2014  Desert Thunder Nationals and the South West Modified Championships season finale.  The best of the IMCA Modifed drivers the South West has to offer will stand off against the best of the rest of the country in the first annual Desert Thunder Nationals at Central Arizona Speedway on Saturday November 22nd and Sunday November 23rd.   This Saturday evening and Sunday afternoon fall blockbuster event has drawn the attention of drivers from around the country and will put the South West Modified Championship stand outs Cody Graham, Eric Center, Chaz Baca and Don Earven and Arizona stand outs Ricky Thornton

JJ Yeley blends in with the Challenge Cup Non Wing 360 sprint cars as they  visit Central Arizona Speedway Saturday night November 8th in a special $12 sprint car spectacular.  Matt Lundy will lead the Challenge cup crew into Saturday nights event as he has had a great run in the 2014 championship sitting 27 points ahead of  Lonnie Oliver and 34 points ahead of Aaron Jones.  Adding his name to the Challenge Cup ranks will be Sprint Car legend and Nascar star JJ Yeley.  Yeley who has put together a ride between his father Jack Yeley and Tommy Lee of Prescott will look to challenge the best of the

Points leader Cody Graham is looking to finish of the last 3 races of season long South West Modified Championships on a high note as well as the rest of the IMCA Modified crew.  In their last trip to the speedway Graham was off the podium but still collected valuable points as  Ricky Thornton Jr., finished just ahead of the veteran Terry Belcher  and the winningest driver at CAS this year Don Earven in one of the most exciting races of the year.    The 43 team of Graham will be looking to return to the way the season began with a win at CAS this Saturday night. 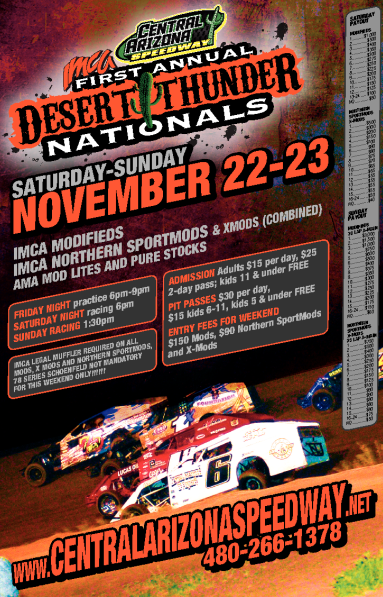 Torco Fuels presents the CDM SuperLate Models in  $1500 to win slugfest Saturday night October 18th.   In their last visit Jason Noll piloted the Total Seal backed 51 machine to victory lane followed by Lonnie Parker and Ricky Thornton Jr.. Thornton who holds the most wins in the Arizona Late Model series will be looking for redemption Saturday night as a motor problems kept him from challenging for the win in his last attempt at the high speed facility. With the winter drivers and fans trickling in and the CAS regulars filling the stands the racing will be electric this Saturday night.

Trevor Miller will be searching for 2 in

Although not leading points Don Earven  has showcased he is the man to beat at Central Arizona Speedway and October 4th the competitors of the South West Modified Championships have their chance as we return to racing at the South Wests fastest track.  As of this release Cody Graham, Brian Schultz and Eric Center sit 1,2,3 and are at the top of the points food chain.  Chaz Baca Jr., Don Earven and Ricky Thornton Jr. all  like to play the spoiler and will try and do so as we return to racing with the best in the west as we get it on on Saturday night October 4th.

Don’t miss the single season appearance of the USAC Non Wing Sprint Car warriors to Central Arizona Speedway this Saturday night September 20th at 7:00pm. R.J. Johnson along with Davis, Pelkey, Deskins and the entire field of USAC sprint car stars will storm the stage of the fastest most aggressive track in the South West.   Set to reach speeds over 115 mph these guys will slide side by side in the most exciting racing dirt has to offer.

Along with the USAC stars, the card will aim to please as the X-Mods, Pure Stocks and Bombers return to action to Central Arizona Speedway.

Brandon Farrington was successful in his last

Saturday night August 16th racing action resumes at the fastest most action packed track in the southwest featuring the IMCA Modified SouthWest  Championships bringing  a fantastic card of IMCA Modifieds, X-Mods, SuperStocks, Pure Stocks and Bombers. Racing action is slated to go green at 7:30pm.  Along with this blockbuster card we will feature an intermission spectacular PIT CREW CHALLENGE for the Modifieds and X-Mods. Details below.

IMCA Modified SouthWest  Championships have enjoyed an extended break as well as the other divisions and will be out in force on Saturday night. Cody Graham leads the Modifieds into Saturday nights event setting 27 points in front of Casa Grandes Brian Schultz and

Headed into the halfway point of the 2014 season Cody Graham and Trevor Miller lead their divisions going into Saturday nights feature.  Consistency has been the key for both drivers thus far in the season as Graham sits 28 points ahead of early leader Brian Schultz in the 2014 SouthWest Modifieds Championships and Trevor Miller sits 8 points out front of early season leader Eric Winemiller in the SouthWest X-Mod Championships.

Along with the Mods and X-Mods the Pure Stocks and Bombers also return.  Terry Churchwell will try and extend his win streak as he continues to dominate the field.     Michael Huffman sits 7 points out of the lead with