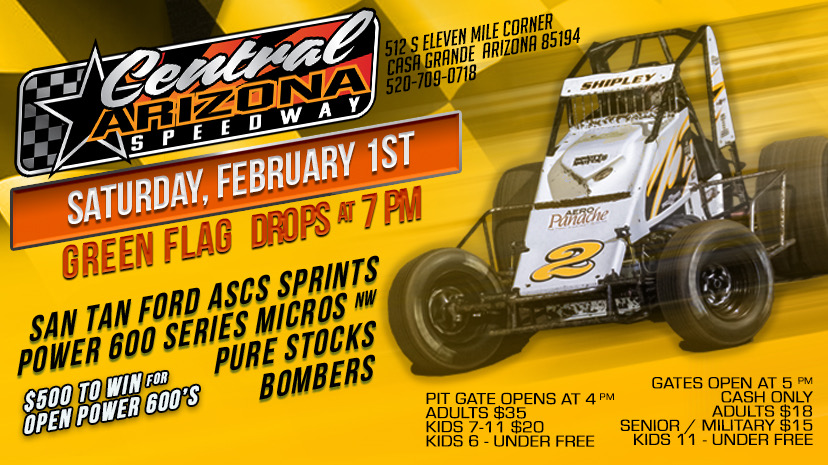 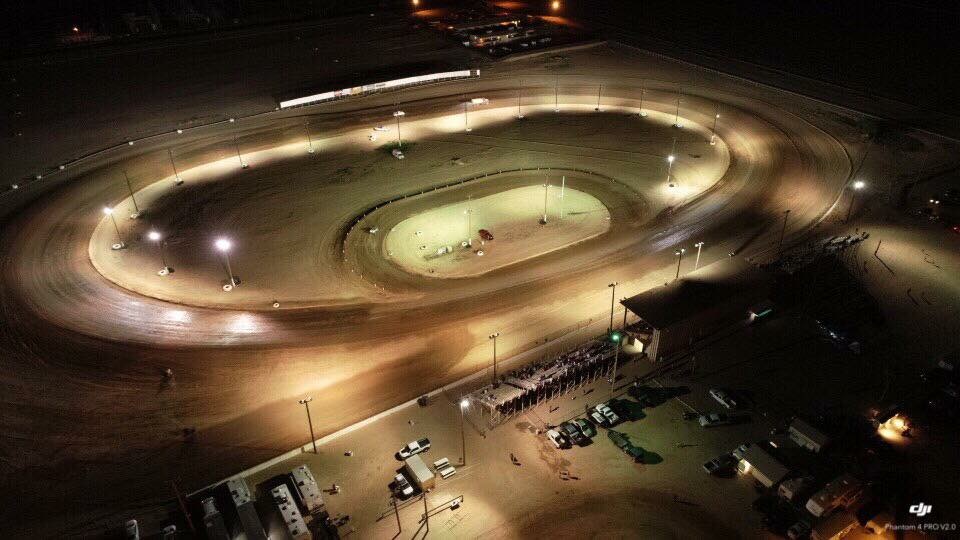 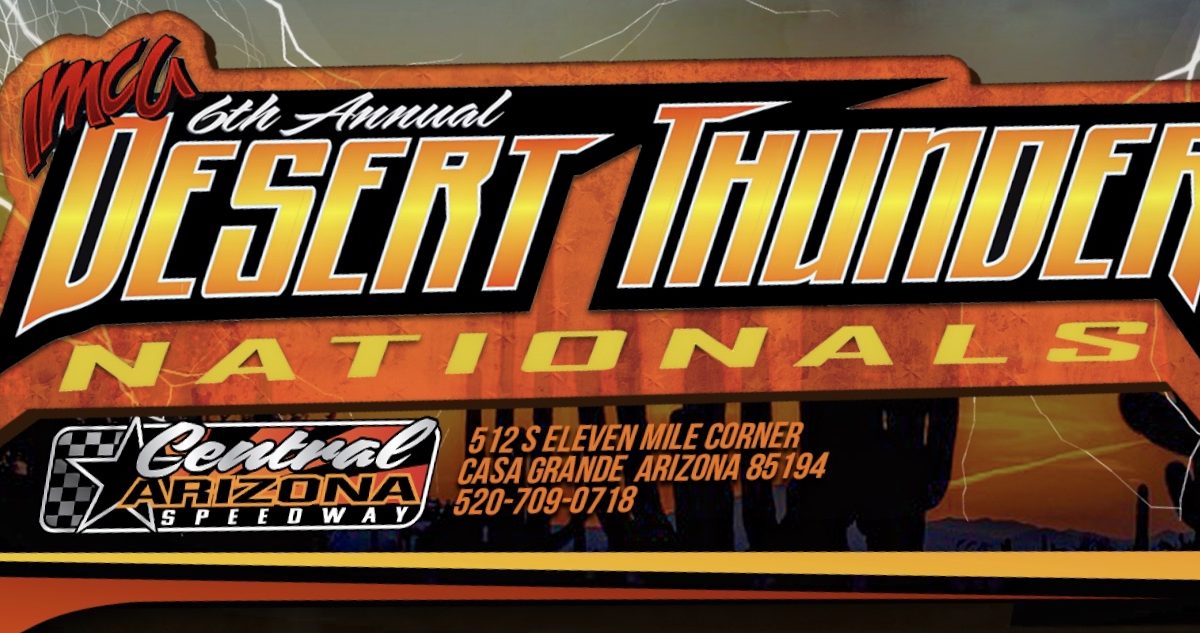 Taylor jumped into the lead at the outset of the IMCA Modified feature and led throughout, fending off a late challenge from Whitwell. 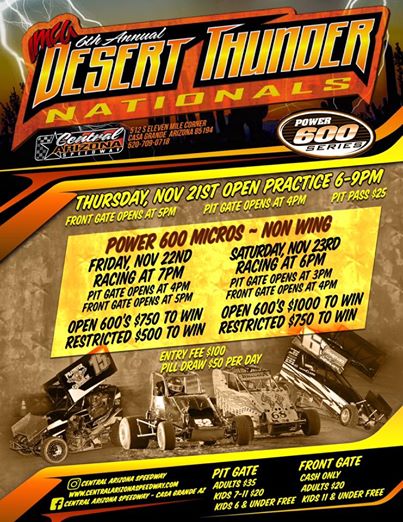 Whitwell wasn’t the only one to make it two-for-two in the three-race set with Cody Thompson besting the IMCA Sport Modifieds again and Zach Tate repeated in the Bombers.  R.J. Johnson and J.W. Henderson were victorious in Power 600 Micro Sprint Non-Wing and Restricted “A” Class competition, respectively.

Whitwell, Thompson and Tate will each 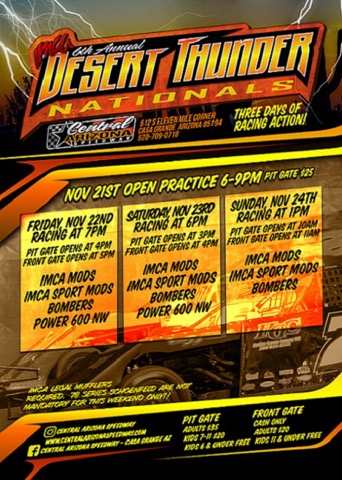 While Whitwell whipped the Modifieds in the opening leg of the three-race set, other Friday night winners included Cody Thompson in IMCA Sport Modified action, Zack Tate in the Bombers, Colton Hardy in the Power 600 Non-Wing Micro Sprints and Dylan Schaadt in the Power 600 Restricted Micro Sprints.

The 6th Annual Desert Thunder Nationals kicks off Thursday, November 21st for practice with three action packed days of IMCA Modifieds, IMCA Sport Mods, Bombers and Power 600 Series Micros. You don’t want to miss some of the best drivers in the country. Cost of admission is $20 for Adults, Kids 11 and under are free. Racing action will get under way at 7:00 PM on the 22nd, 6:00 PM on the 23rd, and 1:00 PM on the 24th! Central Arizona Speedway is located at 512 S Eleven Mile Corner Road, Casa Grande, AZ 85194 behind the Pinal County Fairgrounds. Follow us at https://www.facebook.com/Central-Arizona-Speedway-Casa-Grande-AZ or log onto www.CentralArizonaSpeedway.com  or 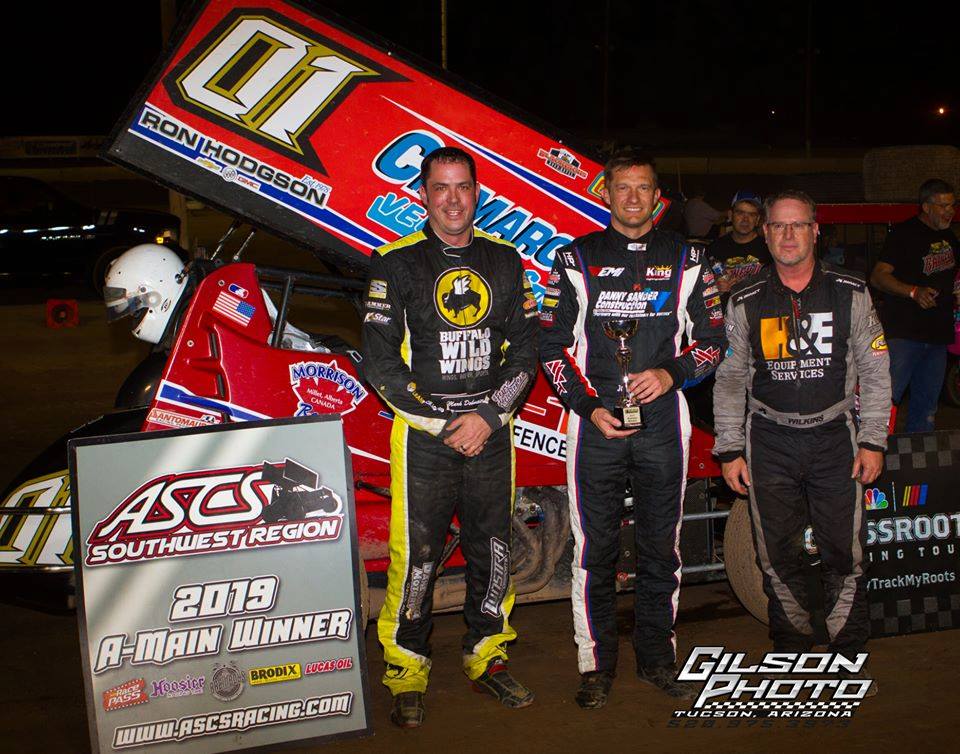 After landing the pole position for the 25-lap feature, Carney II gunned into the pole at the outset and never looked back en route 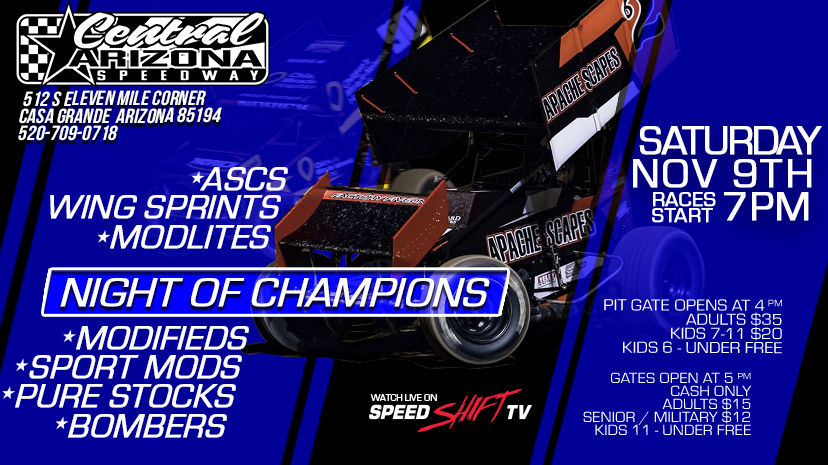 The ASCS Southwest Region will drop in on CAS for the third and final time of the season with the IMCA Modifieds, IMCA Sport Modifieds, Pure Stocks, Bombers and Mod Lites in action as well.

In the previous pair of ASCS Southwest Region events at Central Arizona Speedway, Las Cruces’ Rick Ziehl raced to the checkered flag on both occasions.  The multi-time series champion will try to make it

It’s time for the greatest show on dirt when the ASCS Wing Sprint Cars return for the Night of Champions to Central Arizona Speedway on November 9th for the last time this year. Joining them will be the IMCA Modifieds, IMCA Sport Modifieds, Pure Stocks, Bombers and Modlites. Racing action begins at 7:00pm. Pits open at 4:00pm, Front Gates open at 5:00pm. Cost of admission is $15 for Adults, $12 for Seniors/Military and Kids 11 and under are free. Central Arizona Speedway is located at 512 S Eleven Mile Corner Road, Casa Grande, AZ 85194 behind the Pinal County Fairgrounds. Follow us at www.facebook.com/Central-Arizona-Speedway-Casa-Grande-AZ or log onto www.CentralArizonaSpeedway.com  or call 520-709-0718 for more 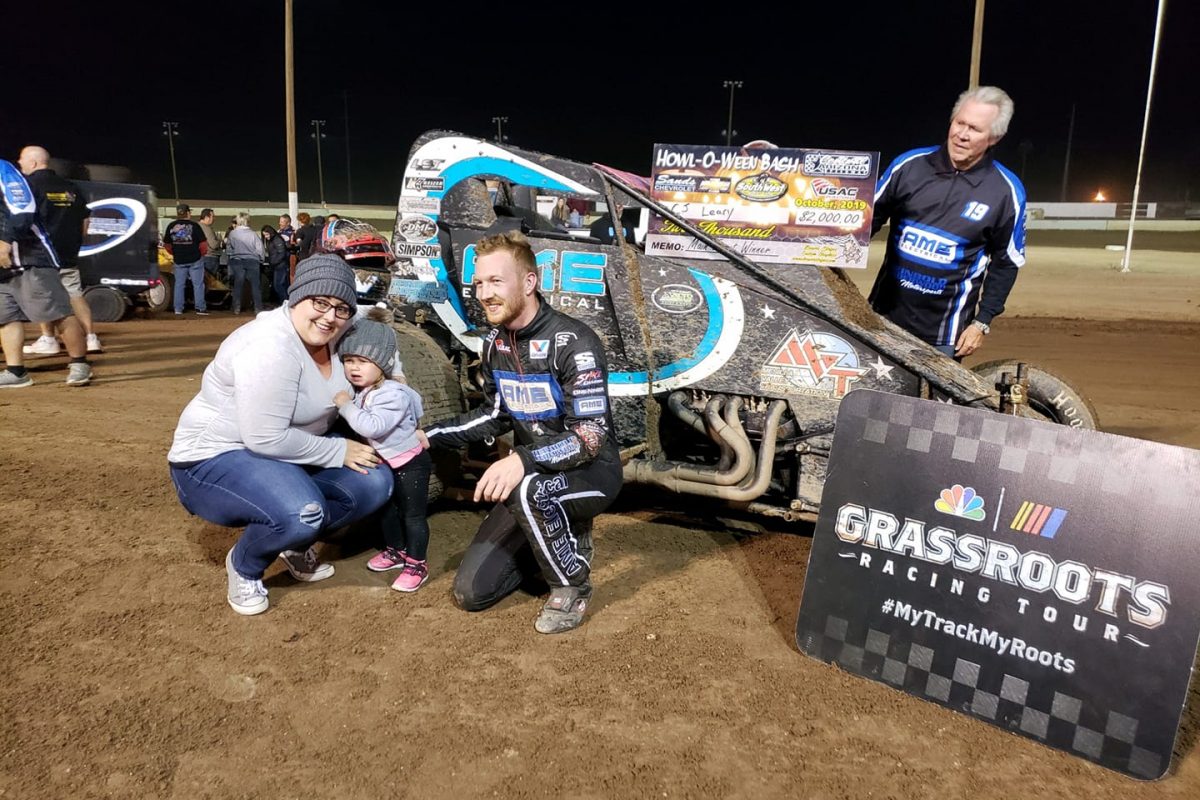 Racing from the sixth starting position, Leary battled to the front in the feature event to take the win aboard the Reinbold/Underwood Motorsports No. 19az Sprint Car.

Leary, who also won the series’ season opener at Central Arizona Speedway in March, raced to the checkered flag ahead of 11th-starter Charles Davis, Jr., with Jake Swanson, current series points leader Brody Roa and R.J. Johnson rounding out the