Points leader Cody Graham is looking to finish of the last 3 races of season long South West Modified Championships on a high note as well as the rest of the IMCA Modified crew.  In their last trip to the speedway Graham was off the podium but still collected valuable points as  Ricky Thornton Jr., finished just ahead of the veteran Terry Belcher  and the winningest driver at CAS this year Don Earven in one of the most exciting races of the year.    The 43 team of Graham will be looking to return to the way the season began with a win at CAS this Saturday night.

The X-Mods are also winding down the season along with the mods and Nolan Morrow is on a role at CAS but Trevor Miller and Eric Winemiller have put in the work all season and sit on top of the leader board headed into Saturday nights feature.  Coming off of what might have been the best race of the night last Saturday this competitive divisions season has only 3 races left to alter the points battle.

The South West Super Stock Championships will also be decided this Saturday night and Allen Kelley will lead Joe Saringer of Flexi Flier into the Saturday night feature.  Heath Mceuen sits in 3rd position above Terry Bridges in 4th.  The Super Stock division that has enjoyed a resurgence this year will finish the card with the door to door racing  they continue to bring. 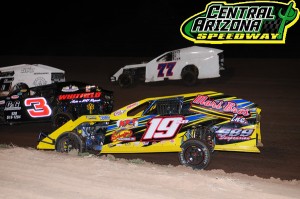