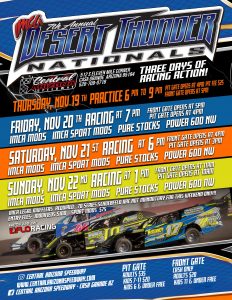 While Thornton, Jr., made it two in a row in the IMCA Modifieds and 2019 IMCA Sport Modified sweeper Cody Thompson made it two in a row as well, Nelson Morrow took Pure Stock honors with Cameron La Rose and Corbin Rueschenberg best in the Power 600 Micro Sprint ranks as 141 total cars took in the second of the weekend’s three Desert Thunder Nationals 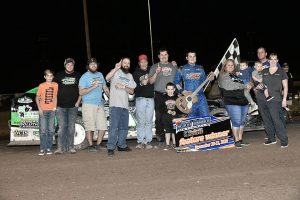 Following a Thursday night practice session from 6:00 p.m. to 9:00 p.m., the Seventh Annual Desert Nationals kicks off with the first of three consecutive rounds of action on Friday night, November 20, at 7:00 p.m.

Round Two takes place on Saturday night with the green flag flying at 6:00 p.m. with the Desert Thunder Nationals then coming to a conclusion with Sunday’s November 22 tilt that goes green at 1:00 p.m.